US interventionists are back with Russia in their sites

On Saturday, Moscow and a large number of Russian cities witnessed protests in support of opposition leader Alexei Navalny, calling for his release. According to Western media outlets, more than 3,000 protesters were arrested. The US on Saturday called on Russian authorities to release the protesters, condemning what it called "harsh tactics" used against them. 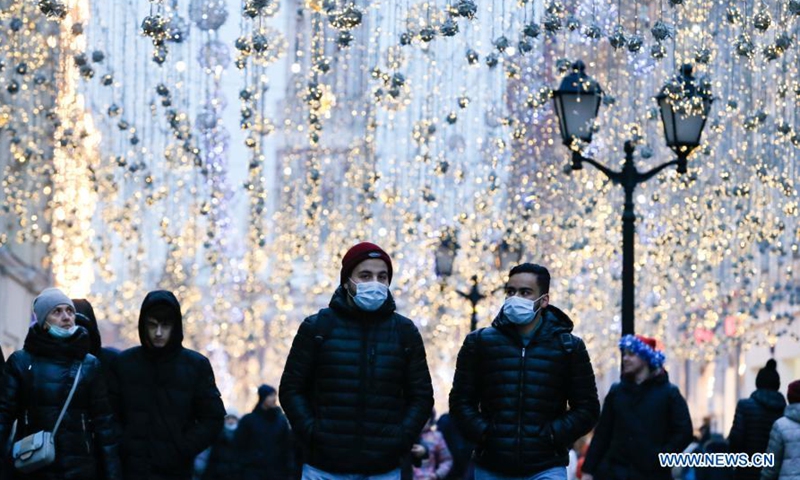 People walk along a street decorated for the New Year in central Moscow,  Russia, on Jan. 1, 2021.

Quite a few Western media cannot hide their excitement. The New York Times argued that Russians are unhappy with their government. The BBC quoted Navalny's supporters as saying, "Russia will be free!"

As it turns out, the US played a role in hyping up the protests. Just as global analysts have predicted, the Democratic Party now in majority political power is not a good thing for Russia.

The US Embassy in Russia announced the time and location of the demonstrations even before they took place. After protests broke out, the embassy accused the Russian government of suppressing the rights to peaceful assembly and freedom of expression. The series of moves proves that the US Democratic Party is again upholding interventionism. The Russian Ministry of Foreign Affairs expressed strong opposition against US' move to incite violence in the country.

While being busy condemning Russia, the new US administration did not mention a single word about the Capitol riots earlier this month in Washington. Its double standards have thus been laid bare.

US President Joe Biden has said "America is back." He believes that returning to the Paris Agreement and the World Health Organization means that the US has returned to the global order it has shaped. But by intervening in Russian protests, it seems that the US, which pursues interventionism and creates instability worldwide, is now back.

Under the pressure of the continuing COVID-19 crisis, the social and economic development of Eurasian countries has encountered serious difficulties. Economic recession runs rampant with inflation increasing. Strict control measures and the lack of social interaction have increased  people's psychological pressure. Once stimulated by a sudden event, the pressure, anxiety and dissatisfaction accumulated in people's hearts will be easily transformed into antagonistic behaviors. Even in East Asian countries, which have had a relatively better performance with the COVID-19 fight, social unrest is becoming more commonplace.

It is not surprising that large-scale protests broke out in Russia. After all, Russia experienced the full outbreak of COVID-19 in April 2020 and the second wave of the pandemic in September. Russian people have been living in fear of an unknown future. Their psychological vulnerability has already reached a critical point. Even it were not for the arrest of Navalny, other incidents would have still caused people to take to the streets and vent their dissatisfaction. Most people are simply taking the opportunity to vent their grievances, which does not mean that they really support the opposition.

Actually, opposition forces in Russia have been rather fragmented, though Navalny is portrayed as a leader of the opposition by many Western media outlets. There are many members who dislike Navalny in the opposition. So far, no one in the opposition is capable of challenging the Russian government. There is no charismatic and effective leader among them to gain the trust and support from all Russians.

In this context, the large-scale protests do not prove that the Russian government is encountering any crisis. These sporadic actions do not show that their president is being rejected by ordinary Russian people. According to a survey by NGO Levada Center, President Vladimir Putin's approval rating was 60 percent in July 2020, one of the highest of any leader in the world.

Although support for the opposition and discontent with the Russian government did contribute to the outbreak of the protests, this was largely due to people letting off steam from social pressures. It is part of the mental health crisis stemming from the pandemic.

This is sharply different from the "Arab Spring" occurred a decade ago. After all, the glories of neo-liberalism were drained in the Trump era. The superiority of the US model has been crushed by the pandemic. Washington is not capable of launching another round of "color revolutions."

Nevertheless, the Democratic-led government will not miss the opportunity to interfere in the internal affairs of Eurasia, or anywhere in the world. The US intends to slow down its pace of decline by creating instability  between rising powers and their neighboring countries. Major global powers including China and Russia need to jointly bolster the principle of sovereignty inviolable. They must firmly oppose any meddling from the US and its allies in the name of protecting "human rights." Only by  doing so can they maintain an external environment of peace and stability.

The author Cui Heng is an assistant research fellow from the Centre for Russian Studies, East China Normal University. opinion@globaltimes.com.cn