In a recent interview with the Sydney Morning Herald, US Indo-Pacific Coordinator Kurt Campbell made the outright extortive threat that the US would not agree to improve its relations with China until Beijing stops its economic coercion of Australia. 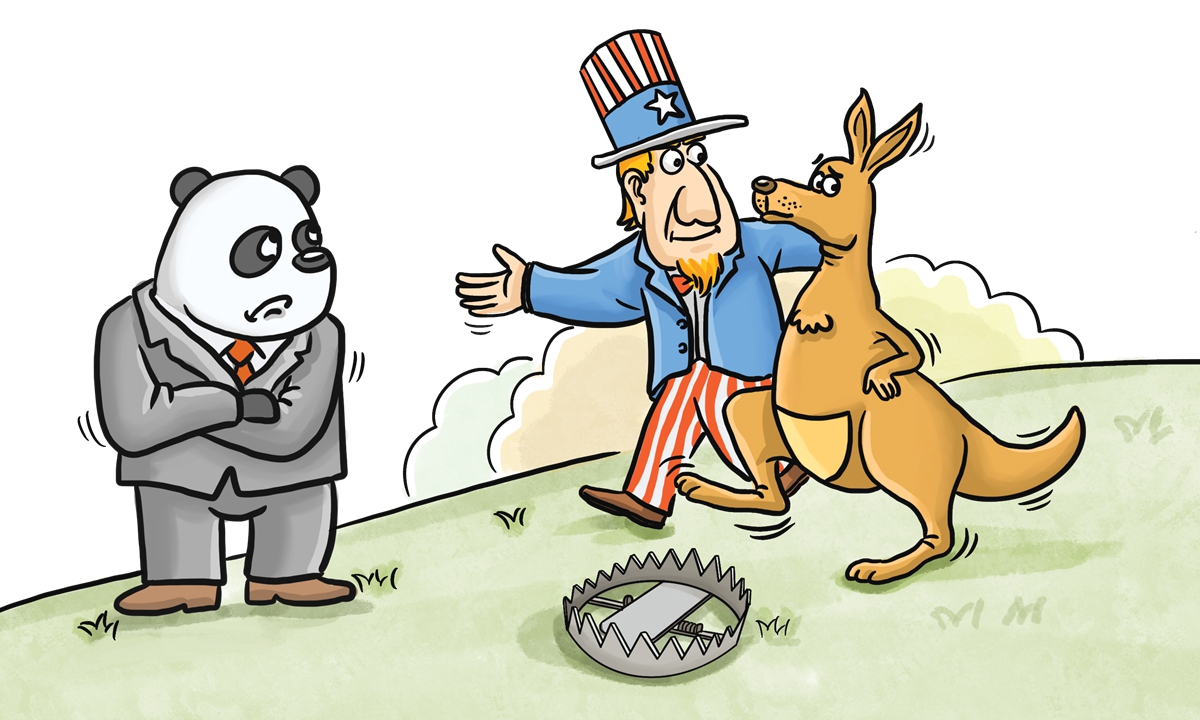 Campbell's remarks are ridiculously detached from the reality of the diplomatic relationship among China, the US and Australia. No one can deny the fact that it is because of the Australian government's incessant recklessness to senselessly agitate an all-round attack on China at the bid from Washington that has ceaselessly poisoned its comprehensive strategic partnership with China. What Australia has been espousing is the US strategy to contain, deter and crush China, rather than acting in the best interest of its own. Campbell apparently misplaced the horse before the cart, ignoring Washington's role which has goaded Canberra to plummet its relations with Beijing into the present abyss.

China never uses economic means as a leverage for any political purposes. No condition had been attached when China imposed anti-dumping and anti-subsidy tariffs on some of the exports from Australia, or suspended imports of certain Australian products due to bio-safety or environmental concerns. No responsible and self respecting sovereign government would succumb to outside intimidations to forsake its legitimate right to protect its economy and the well being of its citizens.

On the other hand, Australia has been priding itself to serve as Washington's deputy sheriff, acting as a fervent vanguard on the US anti-China chariot. Indeed, Australia had followed Trump and his team to launch a series of ferocious attacks on China. It has been fabricating the groundless conspiracy theory to frame China as threatening Australia's national security by influencing Australia's politics. The imposition of a blanket ban on Huawei serves the US strategy to curb China's technological leap forward. And what is more insidious is the Morrison government's proposal, in echo of Trump's blame-shifting tactics, of a so-called independent inquiry into the origin and spread the coronavirus, camouflaged as an innocuous scientific investigation but in essence connived to malevolently inflict responsibility for the pandemic on China.

It is the US ploy to manipulate Canberra, exploiting its reliance on the US alliance to lure it to act as a panda-bashing bludgeon. Australia has sacrificed its own national interest and dignity to serve the Trump administration's America First doctrine. Quite a number of unsuspecting Australians have been inveigled to believe that China poses as a menace, and the United States is bound to salvage them. That is why Australia from time to time defies common sense to enthusiastically play an active role in the US' anti-China strategy, bizarrely believing that China, its biggest trade partner, is a risk to its security domestically and in the Asia-Pacific region.

What Joe Biden inherited from the Trump administration is not only a messy US-China relations, but an even worse scenario in the Pacific that Australia's relations with China is undergoing an unprecedented freefall. Biden opts for an allies first policy, claiming that America is back. As the US is still embroiled in a mesh of domestic political, economic and social difficulties, the new government relies more than ever before on the contributions and engagement of its allies on the international arena. No wonder Campbell cajoled the Australian news outlet that the US is not going to leave Australia alone on the field.

There is a seemingly re-emphasis on the strong and tight alliance between the US and Australia, but underneath the sweet-talk, anyone could make out Campbell's genuine purpose, which is to keep Australia within the US' anti-China circle and push it to act with more dedication.

In fact Campbell's remarks are shoving Australia further onto the very frontline of the US anti-China campaign.

Apart from reassuring one of the most loyal US allies in the Indo-Pacific region, the timing of this statement also seems interesting. This Thursday, China's top diplomats Yang Jiechi and Wang Yiare scheduled to meet US Secretary of State Antony Blinken and White House National Security Adviser Jake Sullivan in Alaska. It seems the US side is playing the Australia card to compel for more bargaining space. Australia is being propelled onto a path of no return, as a pathetic pawn in Washington's power game, while China is being accused of being economically coercive. There is a quintessential wickedness in this ruse to allegorically strike two birds with one piece of stone.

The Sydney Morning Herald says Campbell's remark is the first known intervention of any nation to take substantive steps in support of Australia in its confrontation with Beijing. Statesmen in Canberra must be either tone deaf or very gullible if they should really believe this rhetoric. There is no substance in Campbell's empty promises; he was merely paying lip service without any substantive measures at all.

Or in fact Canberra might not be so thoughtless, unable to understand the real intent of Campbell as it appears. The politicians of Down Under might simply be pretending to have taken Washington's bait, and play along with the US to try to appeal to the anti-China sentiments that is being stoked up by the China hawks. The ultimate goal is not to serve Australia's national interest, but to reap in partisan profits, in particular with the prospect of an imminent election later this year.

It is to our regret that Australia has not sensibly appraised the gains and losses of its current aggressive policies toward China over the past four years. Former foreign minister Julie Bishop, for example, made tough statements about China during her tenure, but she has instead become more clearheaded after leaving her post. On Monday, during a webinar organized by the Australian National University, Bishop called on the Australian government not to engage in unnecessary tit-for-tat exchanges with the Chinese officials. At the same time, former prime minister Kevin Rudd said that the deterioration in the China-Australia relationship was at least partly due to Australia being one of the US' closest allies, which receives bipartisan support in Canberra. Unfortunately, to date, such lucid and judicious voices still cannot override the anti-China cacophony in Australia.

The author Chen Hong is a professor and director of the Australian Studies Centre, East China Normal University. opinion@globaltimes.com.cn