Learning about the history of the Communist Party of China has seen an upsurge among Chinese young people, as they gain wisdom from it being told in increasingly innovative and appealing ways. 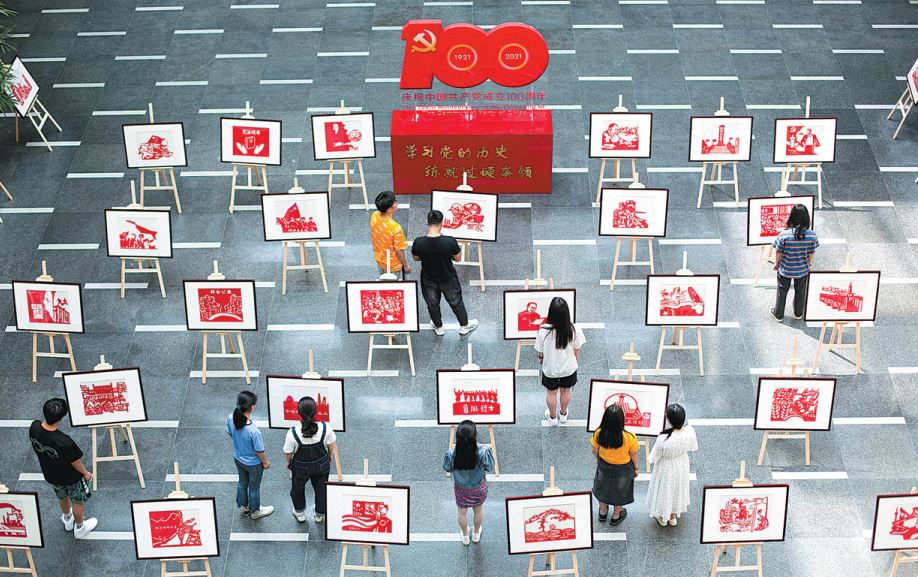 A recent hit TV series, which tells the story of a group of young people involved in the founding of the CPC a century ago, has gained popularity among young audiences and inspired them to learn more about China's revolutionary history.

The Age of Awakening, based on events from 1915 to 1921－a critical period in the birth of the Party－is among film and TV productions celebrating the Party's 100th birthday.

The TV drama has remained a hot topic on social media since being aired in February. A recent item about it on the microblogging service Sina Weibo has been read more than 1.17 billion times, and the discussions related to it show that it has had a positive effect in educating young audiences.

Many netizens said they have been browsing through historical information while watching the series, in order to learn more about the founders of the Party.

One wrote: "The characters in history textbooks came to life, while another said, The sequel to the series is our life today."

More than 70 percent of the TV drama's audience is younger than 35, according to data analyzer Guduo Media. Video platform Youku's data show that among the viewers who left "screen bullets", real-time comments that appear on the screen, the proportion of those born in the 1990s was 1.6 times higher than the average.

Long Pingping, the series' scriptwriter and former deputy secretary-general of the Party Literature Research Center of the CPC Central Committee, said he was moved and grateful that so many young people like the series after he won a best original screenplay award this month.

"I wrote it to let the younger generation know how the awakening, struggle and sacrifice of revolutionary figures 100 years ago relates to our life today", Long said.

This year, various forms of disseminating the Party's history have emerged nationwide, and these have become popular with the younger generation. Rather than being confined to textbooks and classrooms, such new forms have encouraged students to learn enthusiastically and voluntarily.

Weng Tiehui, vice-minister of education, said, "Telling stories that young people love to see and hear is the key to passing on the spirit of the revolutionary martyrs."

Recently, a rap song called 1921, the year the CPC was founded, circulated among students at Hunan Agricultural University. Its catchy lyrics, coupled with a dynamic beat, tell the history of the founding of the Party and the meaning behind it.

It was one of a series of rap songs composed this year by Chang Lai, a teacher at the university, telling stories about the history of the Party in the form of music, in order to help students better understand it. Chang raps with students and explains the stories behind the lyrics.

"Rap is a popular form of music among college students, so I have been trying to integrate it with education," he said in a video interview. "I hope they can understand the knowledge and spirit behind each lyric and learn how to pass it on."

"More content has been put on the internet on different platforms, such as livestreaming and videosharing websites, and these use lively language, "he said. "It makes it easier for us to relate to the past."

The 30-episode cartoon series Blood and Fire: How New China Was Forged is being broadcast daily from June 1 to July 1 on popular video-sharing website Bilibili. It features historical stories from the founding of the Party in 1921 to the founding of New China in 1949.

Chen Rui, CEO of the website, said young people were attracted by their common interest in animation, cartoons and games, and they have gradually developed their own forms of expression for their love for the country.

At Shanghai No 2 Penglai Road Primary School, a board game on the history of the Long March (1934-36) is gaining popularity among students. Players have to answer questions about its history and complete tasks such as singing a revolutionary song.

Zhang Yicheng, the third-grade student who created the game, said he hoped it would remind his peers "of the struggles our ancestors had to endure, while also bringing an element of fun to the learning process."

Zhou Huilin, head of the publicity department of the CPC Shanghai Municipal Committee, said, "Shanghai's younger generation has passionately participated in the study of Party history and has developed many innovative forms," adding that sites in the city related to the history of the Party have also become popular attractions among young people.

At the Site of the First National Congress of the CPC in downtown Shanghai, the number of visitors aged 35 or under has been rising－an indication that younger people today are becoming increasingly interested in learning about the history of the Party and the country.

At Fudan University, a team of 30 Party members from different majors, such as arts, medicine and engineering, has been volunteering at an exhibition about The Communist Manifesto held at the university.

The volunteers tell the story of Chen Wangdao, a scholar and educator who completed the first Chinese translation a century ago of the groundbreaking work by Karl Marx and Friedrich Engels.

At East China Normal University, a team of seven students majoring in Japanese, French, German and Spanish was set up in October to share stories about the history of the Party.

In a recent activity, four team members shared stories about the Party in foreign languages with over 350 students at Shanghai Tianyuan Senior High School Affiliated to Beijing Foreign Studies University.

"It is a valuable test of my professional ability in teaching", said Ding Huiya, one of the team members. Through the preparations, I have a deeper understanding of the history and spirit of the Party, and this encourages me to cherish the peace we enjoy today.

Dong Yingying, deputy director of the university's publicity department, said that the younger generation is thirsty for knowledge and has a strong curiosity and learning ability. These characteristics foster innovation in history education, she said.

"Those born after 2000 grew up in an era when the economic and social environment was totally different from the period when the Party initially grew. As a result, education should focus more on building an equal, interactive educational environment."

"Education will teach the younger generations what the country has been through, where it is now and what might happen in the future, and improve their decision-making and judgment when tackling difficulties in life", she added.