International students in Shanghai are trying to make their contributions to the fight against the novel coronavirus pneumonia.

Those at East China Normal University's school of advanced international and areas studies have donated 5,000 yuan (US$715) to a foundation at the university to support work at Renmin Hospital of Wuhan University.

“As a country with a civilization of more than 5,000 years, China has experienced and overcome numerous hardships and difficulties. This outbreak is just another one. It will only make the Chinese people more united. We believe that China and Wuhan will win this battle against the virus,” said Diadichko Aleksandra, from Russia.

Sisavath Phonenasay, a Laotian student from the school and chair of the Laotian International Student Association in Shanghai, organized fellow Laotian students in the city to donate nearly 7,000 yuan to Hubei Province.

Habibur Rahman, a student from Bangladesh majoring in Chinese international education, encouraged other Bangladeshi students in China to donate immediately after he heard that a university fundraising channel was opened. He and another two Bangladeshi students raised a total of 2,000 yuan.

Rahman said the medical staff, deliverymen and drivers who have been working to ensure public transport all impressed them and they wanted to do their part, no matter how small.

“The virus is threatening people’s lives. We can’t just stand by,” he said. “No matter which country we come from, we must unite. We also want to express our support and friendship to Wuhan and the Chinese people. We firmly believe that China will win this battle soon. We love China. China is our second home!”

Habibur Rahman, a student from Bangladesh, dons his mask.

Rahman had planned to go to Wuxi, Jiangsu Province, to visit his older brother who is working there. “But when I heard about the virus outbreak on January 25, I decided to follow the government’s advice to stay where I am,” he said.

His brother has returned to Bangladesh, and his mother asked him to go back, too.

“She was worried about me,” said Rahman. “But after I told her I believe China can solve the problem and everything will be OK soon, she calmed down and asked me to eat more fruit.”

According to Shen Jun, director of the Student Life and Support Office at East China Normal University, there are about 180 international students on the two campuses of the university.

ECNU has postponed the start of the spring semester and told faculty and students off campus not to return. Those who do will be quarantined. The university is now closed to the public and only those with valid campus ID cards are allowed to enter, but need to apply for entry in advance.

Public study areas, including libraries and teaching buildings, have been closed. The canteens now only offer take-away food.

The university's Global Education Center publishes notices on virus prevention and control every day on its WeChat account. Many WeChat groups have also been established to track students’ locations, health conditions and needs.

As some students prefer cooking for themselves, the university has established partnership with nearby supermarkets which deliver food to the gate of the university twice a week. The university also provides students with masks regularly.

“Everything is convenient in the university. I have only left the campus twice in the past 20 days,” said Rahman. “The teachers also encourage us to take some outdoor exercise, such as running and ball games that can be done alone, to keep ourselves healthy and happy.”

Rahman usually reads books and listens to music in the dorm and sometimes goes out to practice cricket.

Elizabeth Miller Holly, a master's student majoring in politics, also said that although life is a little bit different, she understands the measures the university has taken.

Shen said the university has launched online activities such as competitions on Chinese idioms, lantern riddles and singing to keep students busy, happy and healthy.

A cleaner sprays disinfectant on doors. 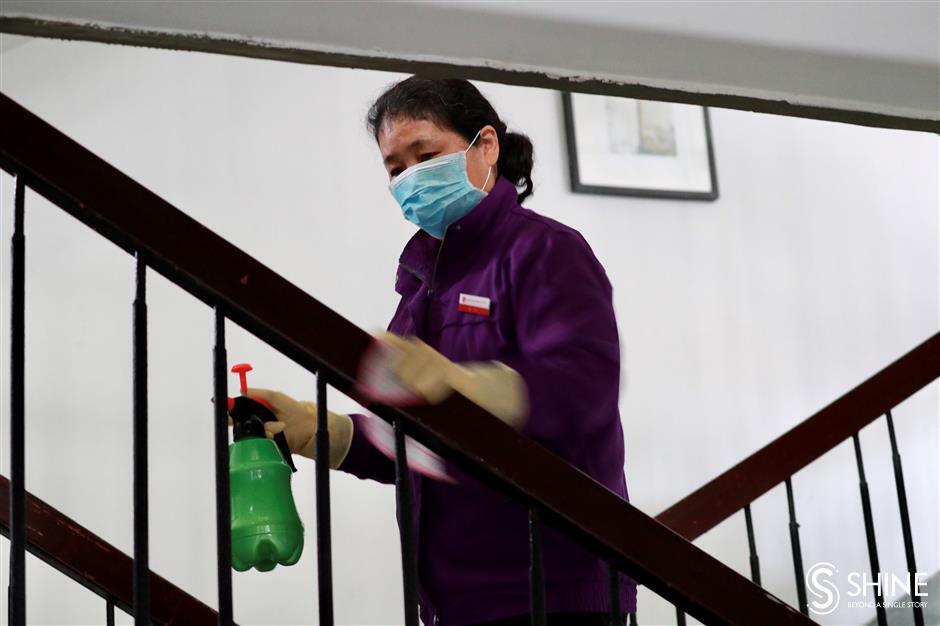 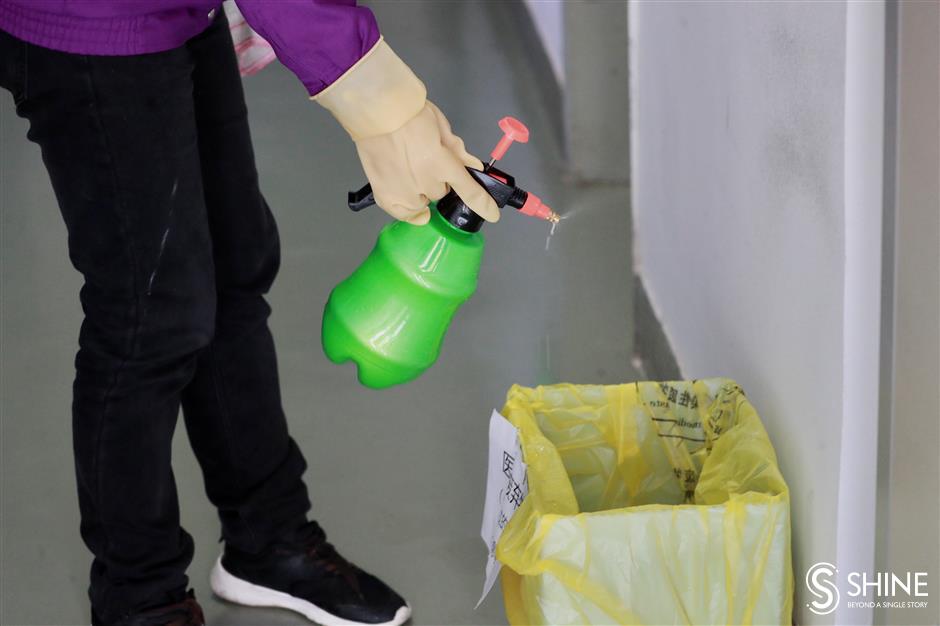 A cleaner disinfects a bin for used masks. 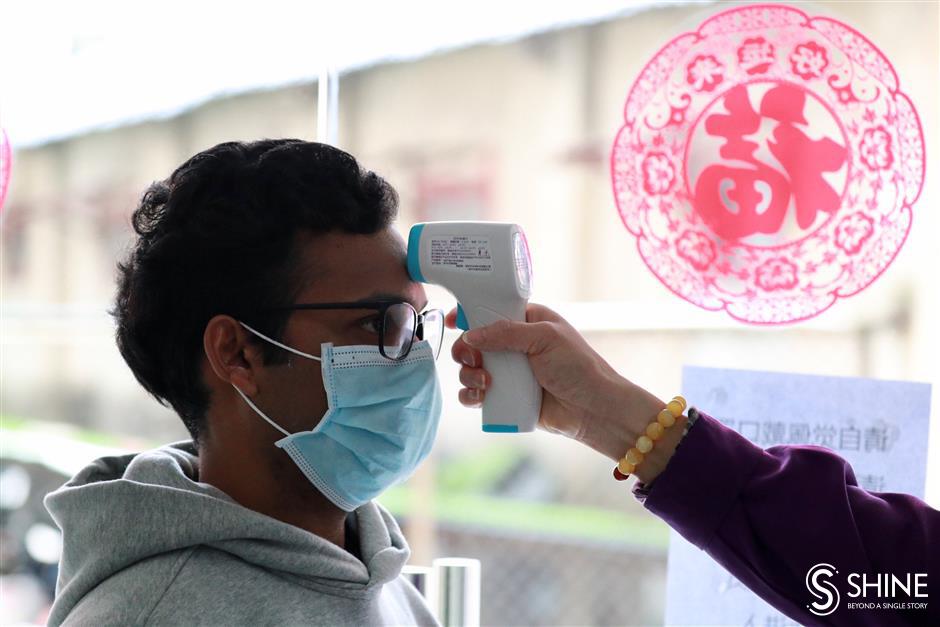 Habibur Rahman has his temperature checked when entering his dorm. 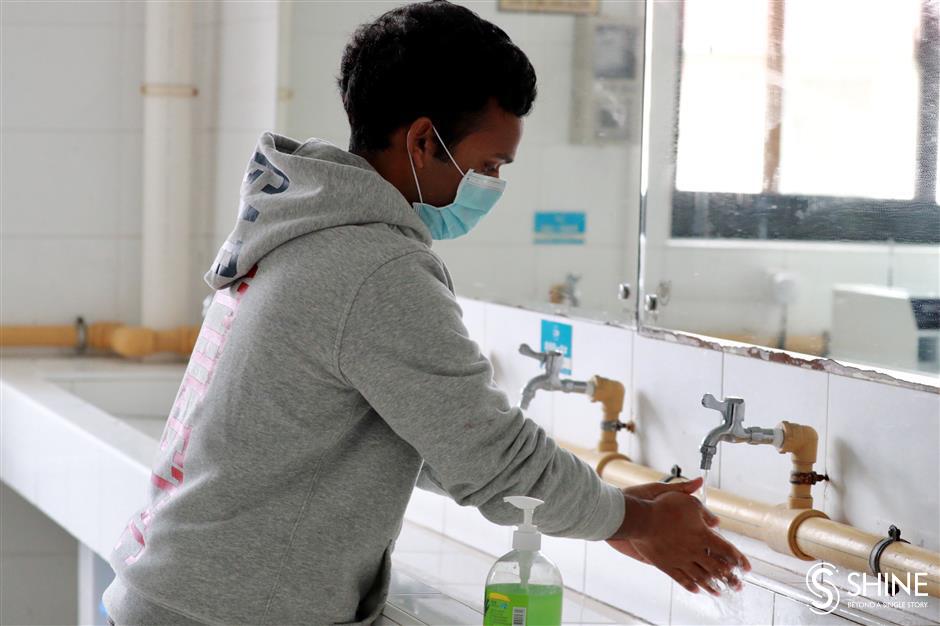 Rahman washes his hands after returning to the dorm. 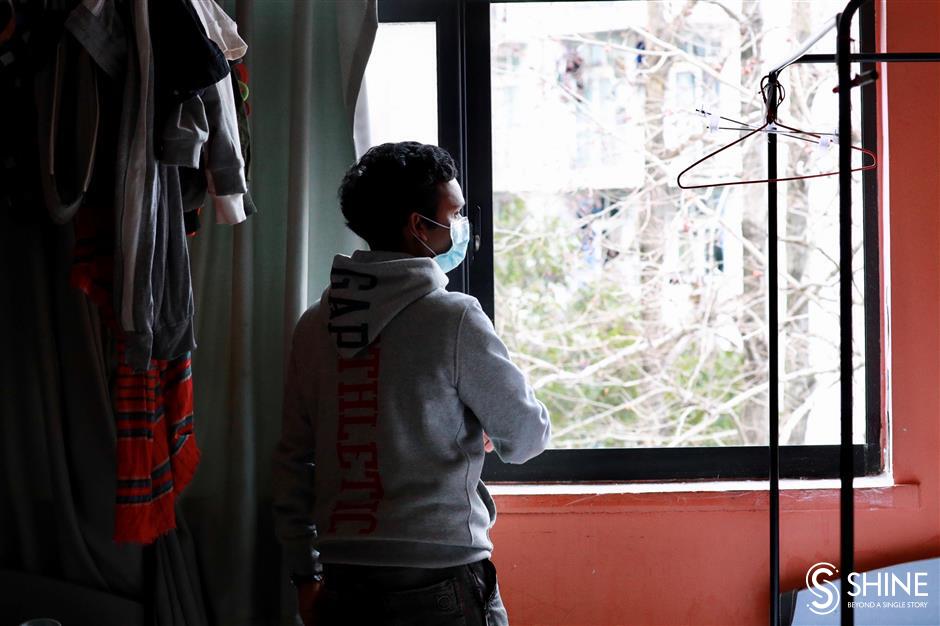 Rahman in his room 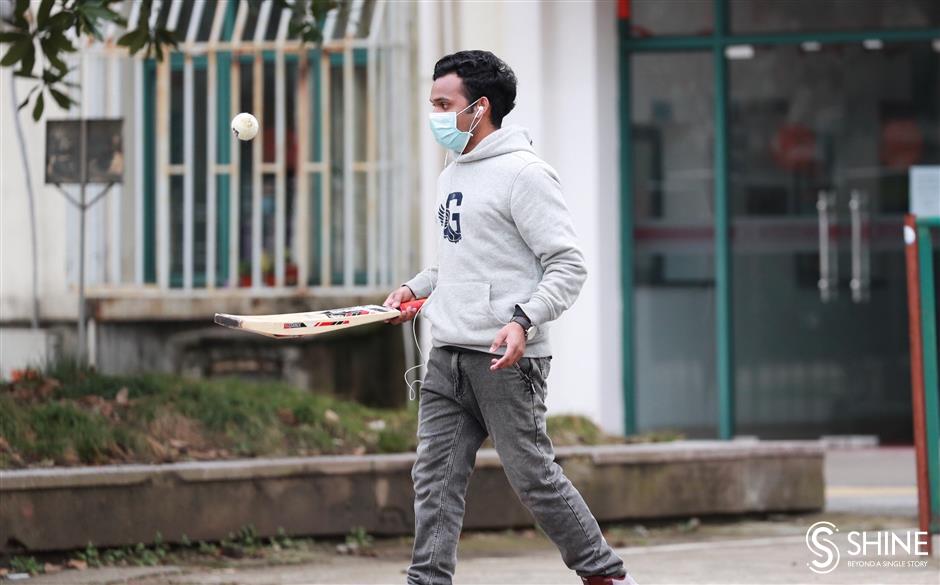 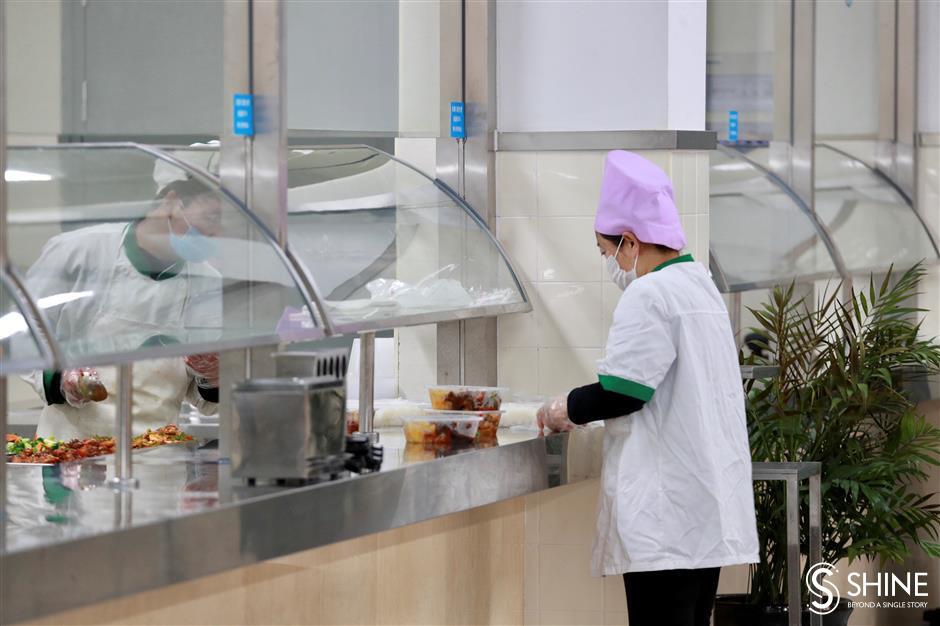 A student buys food at the canteen. 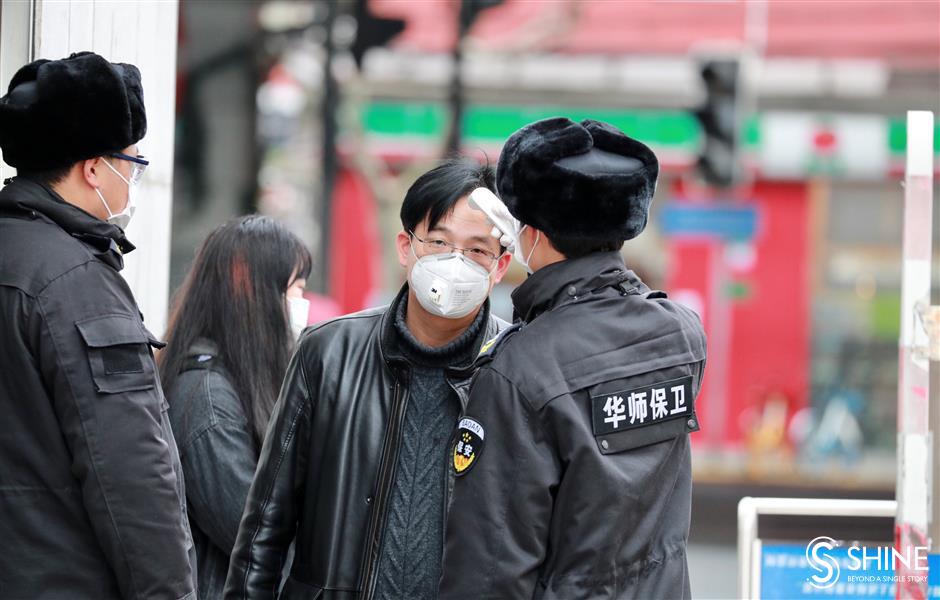 A man entering the university has his temperature checked. 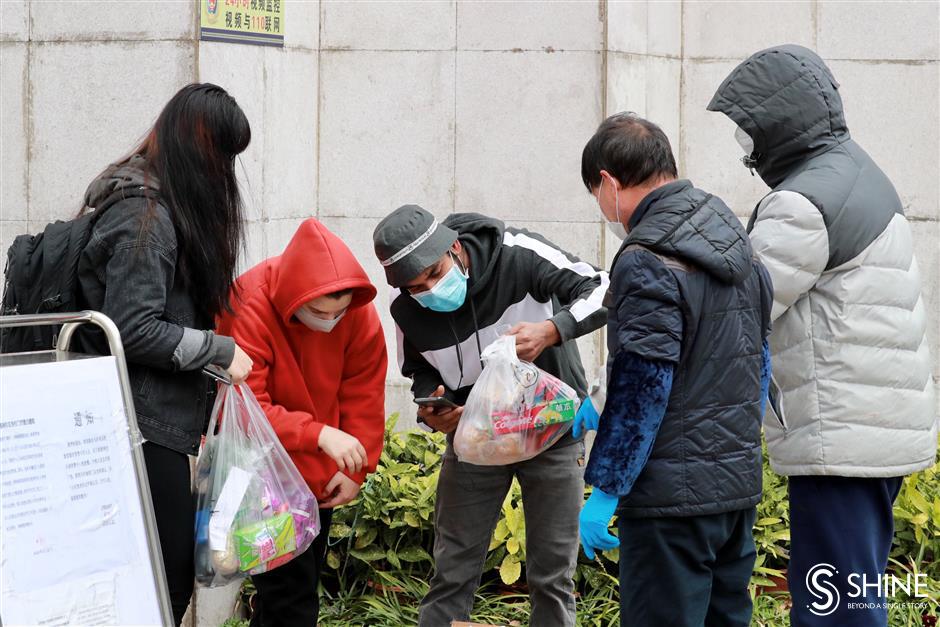 Students pick up food they ordered at the university gate.