Having closed the door of his office on the 14th floor of the Shanghai New York University Academic Building in the Pudong New Area, Yu Lizhong officially stepped down as first chancellor and chairman of its board of directors earlier this month.

As the first chancellor of NYU Shanghai, Yu Lizhong officially retires this month after

having been shepherding the school for eight years.

Yu’s relationship with New York University dates back to 2006, when the school opened its first study-away center in China on the East China Normal University campus. He was appointed NYU Shanghai’s first chancellor in April 2012, soon after the Chinese Ministry of Education gave its preliminary approval to allow ECNU and New York University to establish the world’s first Sino-US university.

As chancellor, Yu shepherded NYU Shanghai from its earliest days in the ECNU Geography Building with a single freshman class of fewer than 300 students to a thriving university on Century Avenue with more than 1,500 undergraduate and graduate students from some 70 countries and regions. It is poised to move to a brand-new 114,000-square-meter campus in the Qiantan area of the Pudong New Area in 2022.

A student receives a warm welcome from Yu Lizhong (left).

“I’ve never thought that I would end up my career in such a university,” Yu told Shanghai Daily in an interview on his final day as chancellor of NYU Shanghai.

Yu said he had planned to continue his academic research in geography after retiring as president of ECNU eight years ago when he was 63 years old.

“But when I was assigned to the new post, I could not say no because I had been so deeply involved in it and I felt obliged to bring it forward,” he said.

Yu said he had thought that he could retire soon after the university was established, but he continued for more than eight years.

“The university was a first in many areas without existing models and my colleagues from China and the US have been working together to explore the path all the time,” he said.

“Many things that seem easy for other universities are difficult for NYU Shanghai. The government departments are also wading across the river by feeling for the stones. For example, the registration of the university is a new thing for the civil affairs bureau in the city and the officials had to work out new regulations for the registration.” 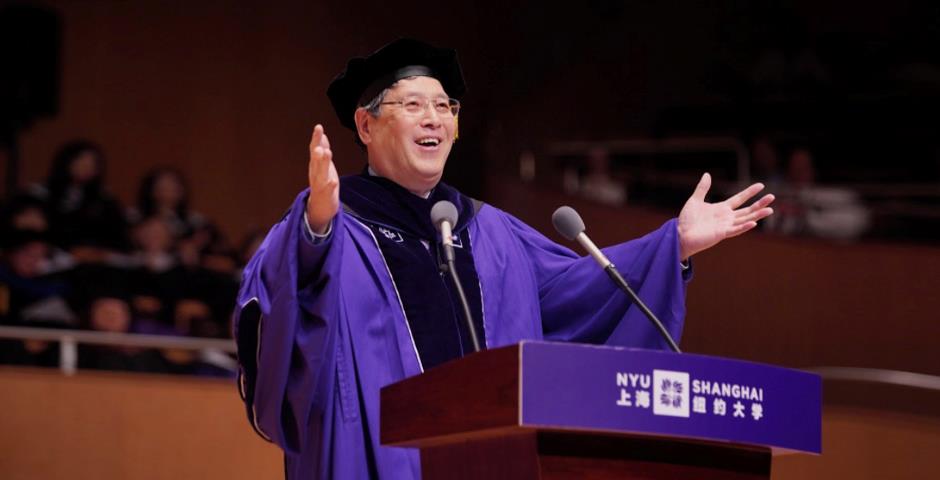 Yu Lizhong, then chancellor of NYU Shanghai, delivers a speech at the NYU Shanghai graduation ceremony.

The education approach of the university was another challenge for Yu and his colleagues.

“How to fuse the two different education systems and cultures together is what we have been doing.”

Yu said he did not want to make NYU Shanghai just a platform for Chinese students to receive an international education while staying in China but a world-class university, with a new education approach and an experimental field for educational reform in China.

“We aim to set up a positive example of international collaboration for higher education featuring mutual understanding and integration among different cultures,” he said.

“Younger generations with global vision and the ability to communicate and cooperate across cultures will be crucial to resolving difficult global issues and promoting global sustainable development. In NYU Shanghai, we recognize differences among cultures, countries and individuals, but we are also trying our best to find out the common ground by communication, compromise and cooperation.

“A joint-venture university should not be a battlefield for ideologies, but a melting pot for different cultures,” he added. “I think it’s especially important today with the complicated Sino-American relation. We have to realize that the whole world is a community with a shared future.”

Yu said the university does not infuse a fixed view into students, but lets students understand cultures, develop their own views of the world and make their own decisions. It also encourages students to hold positive attitudes toward life and a sense of social responsibility.

“Besides two compulsory courses, there are more than 100 courses available for students, which they can choose based on their interests,” Yu said. “Many courses initiated in NYU Shanghai are now being used by New York University.”

He said everything in NYU Shanghai is student-centered. He is closely involved in students’ everyday studies and activities with new communication tools and his willingness to be with students.

One example of his dedication to serving students is his WeChat account. Every WeChat friend of Yu can see all the information he published, which is almost all about NYU Shanghai.

Yu is one of the few chancellors who is proficient in using all kinds of social media.

“The reason why I use them is to follow students. I can communicate with students via social media,” said Yu.

What he prefers is the immediacy and high efficiency of communication in social media.

Wang Zixin, a graduate of Class 2020, said: “Chancellor Yu will give responses to every confusion about the university’s policies and complaints of personal problems.”

Yu Lizhong (right) poses for a photo with a student and her father.

Yu has been taking every opportunity to promote the idea of education and brand of NYU Shanghai among students, parents, educators and the public.

He is often seen wearing an NYU T-shirt which is emblazoned with the logo of the university. He believes that as a young university, it is necessary to have active publicity and presentation to build positive images. For Yu, wearing a T-shirt is not only an identity for himself, but also a channel to disseminate the university to the public.

Yu said that during the early days of NYU Shanghai, students, parents and high school administrators all hesitated whether they should choose NYU Shanghai, as they were unsure about the future. Yu outlined his blueprint to build a unique university to them again and again.

Now, with four classes of graduates, Yu said he would give NYU Shanghai 120 points if 100 was a perfect score. His words are based not only on the excellent placements of the students, but also the fact that students have developed their own values and made decisions for their own life.

Wu Guangyu, a graduate of Class 2020, chose to study in NYU Shanghai four years ago, when the first class hadn’t graduated yet, despite the concern of his high school teachers.

“When I first entered the university, there was no major for students, which allowed me to explore my interests freely,” said Wu. “The study in NYU Shanghai helped me to break out of my comfort zone.”

In this fall, he will study for a master’s degree in data science at Columbia University.

“Professors of every subject have their special scientific thinking and personalized teaching methods,” he said. “Their strong interests in their subjects have stimulated my interests in this field.”

Wang Zixin, who will further study at Tsinghua University, has completed two degrees in economics and data science at NYU Shanghai. He is a current member of the Forum for American/Chinese Exchange at Stanford University and a former delegate to the World Bank Youth Summit.

“I couldn’t have received a Schwarzman Scholars fellowship without the experience and achievement in NYU Shanghai, which provided many opportunities that I couldn’t get in other schools.” Wang said.

Though Yu has retired from his 40-year career, his contributions have been seen and will be remembered.

Students, faculty and parents are leaving words on a webpage to express their love for the 71-year-old.

“When the history of NYU Shanghai is written, one name will be on almost every page: Yu Lizhong,” said Andrew Hamilton, president of New York University.

“Over his tenure as chancellor, Chancellor Yu’s leadership has enabled NYU Shanghai to blossom into a vibrant success and an atmosphere of dynamism and inclusion that blends the best attributes into a true community.”