SORTING OF TRASH TAKES OFF NATIONWIDE

Success in Shanghai paves way for other cities

When Shanghai resident Chen Meixiang starts preparing dinner, she puts a bag beside the sink, into which she places discarded vegetable leaves and food left over from the meal.

At about 7:30 pm, she takes the bag and others containing trash to a refuse station in her neighborhood, where she dumps the food waste into a brown bin and the other trash into a black bin.

When Chen has cardboard that has been discarded or empty drink cans, she places them in a green bin at the center.

Like millions of residents in Shanghai, she began sorting trash a year ago, when the city introduced a regulation on domestic waste management, requiring the public and companies to sort their trash into four categories, or face fines.

The regulation initially met with some criticism. However, media campaigns, a financial incentive plan and improvements to the city's trash treatment system, together with strict law enforcement, have overcome any doubts about the new rule's effectiveness.

Shanghai is the first city in China to announce the successful implementation of domestic trash sorting.

According to the Shanghai Greening and City Appearance Administration, which oversees trash collection, transportation and treatment, the city's daily volume of kitchen waste amounts to 9,600 metric tons. The respective figures for recyclables and hazardous waste are 6,800 tons and 3.3 tons.

In recent months, a nationwide waste sorting policy has been adopted, with the aim of reducing the total amount of domestic trash through recycling, biosafety treatment and incineration.

Last year, the Ministry of Housing and Urban-Rural Development issued a notice asking all 300 or so cities at prefecture level and above to introduce systems to classify and dispose of trash by 2025.

The experience in Shanghai has shown that implementing trash sorting－a seemingly simple and straightforward process－is a battle for hearts and minds, and winning this fight requires not only laws and policies, but also a combination of governance, technology and persistent human efforts at grassroots level.

Zheng Lianyong, Party secretary of Xingfu village neighborhood committee in the Yangpu district of Shanghai, which oversees trash sorting at four residential communities comprising more than 1,300 households, said, "There is a diverse population in the communities, which makes it difficult to educate people about trash sorting."

She followed the city's guideline for implementing trash sorting by setting up centralized stations, which only opened between 7 am and 9 am, and 6 pm and 8 pm.

Initially, Zheng deployed seven community workers at the stations to ensure that residents disposed of different types of waste correctly. But she soon found that young people returning home from work late in the evening tended to leave their trash at the stations when they were closed. The trash mainly comprised takeout food and packaging.

To solve the problem, Zheng extended the evening opening hours to 9 pm. She also distributed trash sorting material to every household in the communities and posted related information on residents' WeChat groups.

In May, Zheng installed a smart camera at one of the stations, which warns when people are approaching the facility when it is closed.

"It works very well. We can see people who initially intended to leave trash bags in front of the station returning home with them," she said.

Zhou Chun, founder of a company that promotes trash sorting, said her team has educated people in more than 300 residential areas about the process. Through extensive communication and by adapting rules to make them more practical for each community, most residents are abiding by the regulations.

"Technology combined with management is my approach," said Zhou, who has designed smart trash stations with cameras and sensors to help community workers implement waste sorting.

In addition to using persuasion, urban patrol officers have been strict with those who violate domestic waste management regulations. Since the regulation taking effect, nearly 10,000 fines were handed out as officers conducted 152,000 inspections.

Insiders said the total amount of fines imposed for trash-sorting violations in the past year was "huge", with a large proportion of them being paid by office building management companies, construction sites and trash transportation companies. Under the regulation, fines for companies range from 500 yuan to 100,000 yuan.

Sorting trash is the first step in domestic waste management, but a lack of separate transportation and treatment for waste can hamper such efforts.

Trash-sorting programs for which pilot measures were launched in eight cities nationwide, including Beijing, Shanghai and Guangzhou, capital of Guangdong province, as early as 2000, ended in failure.

One year ago, his team, which covers 18 roads in Xujiahui district, only had one truck to collect kitchen waste. "When trash sorting started, this truck could barely handle the increased quantity of food waste," he said.

The company quickly bought new trucks, and now has five to handle food waste. Three of the vehicles collect kitchen waste from restaurants at midnight, while the other two remove such trash from residential communities in the morning.

The company also developed a mobile app for workers to report the quality of waste. If the workers spot plastics or other waste, they upload photos and alert the local community committee and property management office.

"We refuse to collect trash if it is not sorted properly and the people responsible don't correct this," He said, adding if the workers collect mixed waste, their truck will be denied entry at the trash transfer station.

Every day, some 15,000 tons of domestic waste－or 60 percent of the total generated in Shanghai－is sorted at origin before being transported 40 kilometers from the city center to Laogang on the coast in Pudong district.

Occupying nearly 30 square kilometers－roughly the size of Macao－the trash treatment site is the biggest in Asia. It was built in 1985 as a landfill, and since then has been encroaching on the East China Sea.

The second phase of the Laogang Renewable Resource Recycling Center, an integrated incinerator that can handle 6,000 tons of waste a day, began operating on June 28 last year.

Standing in the central control area with a number of large screens showing real-time images and data from eight incineration furnaces, Zhu Siliu, the center's general manager, said that before the incinerator was built, nearly 3 million tons of trash had to go to a landfill. Now, very little waste needs to be taken there.

Together with the first phase of the center built in 2013, about 10,000 tons of trash is incinerated at the center each day.

"One ton of sorted trash can generate 550 kilowatt-hours, a rise of 20 percent compared with when trash is mixed," Zhu said, adding that sorted trash also lowers the level of toxic emissions.

To deal with the rising quantity of kitchen waste, a biological resources recycling center started operating at the site in October, handling 1,000 tons per day.

After preprocessing and anaerobic digestion－where microorganisms break down biodegradable material in the absence of oxygen－kitchen waste is turned into biofuel and biogas residues, which can be used to treat soil contaminated by heavy metal, or be made into organic fertilizers.

The success of Shanghai's trash sorting program has inspired many cities to follow suit.

Last month, cities such as Nanjing, the Jiangsu provincial capital, and Jinan, capital of Shandong province, began seeking public opinion on their own regulations. By the end of this year, trash sorting will be implemented in Harbin, capital of Heilongjiang province, Haikou, capital of Hainan province, and Sanya, the southernmost city in Hainan.

Zhou, the company founder, said she has received invitations from many other cities to carry out trash sorting. Her team is working with the authorities in Chang'an town, Haining, Zhejiang province, to launch such a program in 20 communities.

She said she was initially a little pessimistic, as other cities need a long time to build up administrative capacity and related infrastructure.

"But our seven pilot communities have made good progress in recent months," she said. "Maybe in the next 10 years, trash sorting can be successfully implemented across the country."

Zhang Yong, associate professor of environmental sciences at East China Normal University in Shanghai, has been following the city's trash sorting initiative for years. In recent months, he has reported on the experience in Shanghai to officials in cities nationwide.

"Some experts were not too optimistic when Shanghai introduced the regulation last year, because a similar initiative in 2012 was not successful. But this time, to the surprise of many, Shanghai has made it," Zhang said.

He added that the Shanghai authorities' political resolve, cooperation among the public and a constant emphasis on trash sorting in society have played vital roles.

"Shanghai has set a good example in making trash sorting key to evaluating its officials and pushing everyone to take action," Zhang said.

"There were many events and major tasks in Shanghai last year, but looking back, trash sorting probably left the greatest impression on the city's residents."

"It has entered all our lives, changed habits and brought more benefits than the completion of new roads or metro lines." 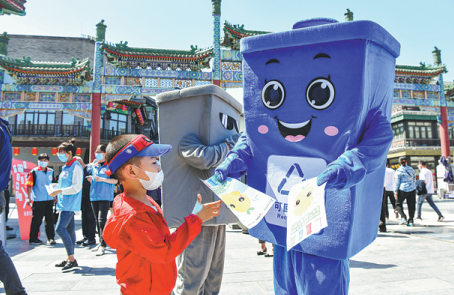 Cartoon mascots help to disseminate information on trash sorting along Qianmen Street in Beijing on May 19. 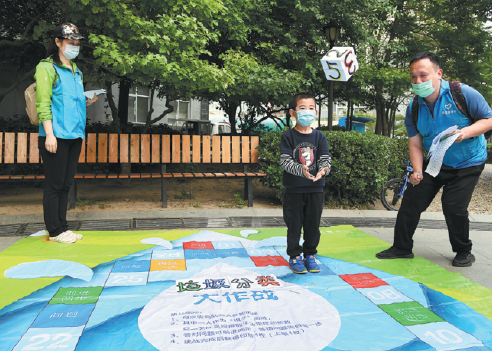 A garbage-sorting game is played at a residential area in Beijing's Haidian district in May. 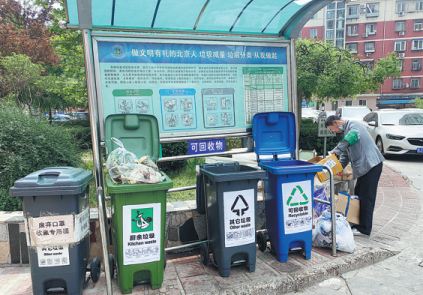 A community worker sorts trash at a refuse station in a neighborhood in Beijing's Xicheng district. 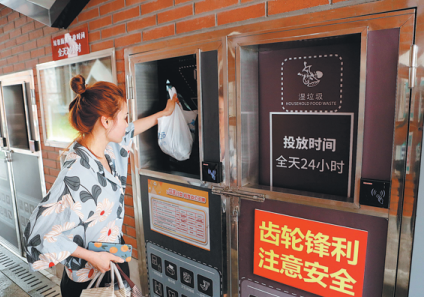 A resident places waste in a designated bin in Shanghai's Fuyuan neighborhood in May. 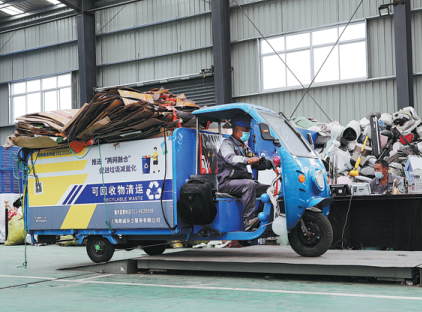 Waste for recycling is weighed at a service center in Shanghai's Minhang district last month. 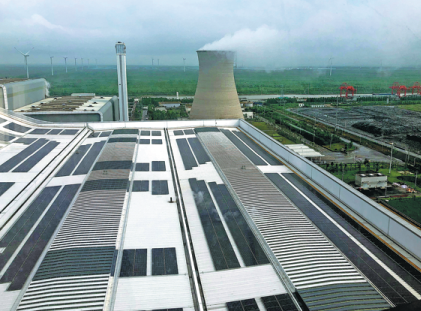