Volunteers who have 'graduated' from CIIE thankful for the experience

Volunteers are integral to the success of large public events such as the China International Import Expo (CIIE), which draws hundreds of thousands of visitors every year. Among the over 4,700 volunteers recruited from the city's universities and colleges to serve at the event this year, nine of them are in their fourth year of service at the CIIE, which is also in its fourth edition. Some of them said the experience was like a parallel degree program to them.

Following the changes in the country's largest comprehensive import expo over the past four years and the volunteer services it provides, the volunteers in their graduating years said they feel fulfilled and thankful. Shanghai Daily heard the stories of three of them.

As a student who studies Russian, Shen Yin, 23, is considered to be more versatile at this international event with the presence of a number of Russian-speaking foreigners.

Shen, now a graduate student at East China Normal University, has been assigned to various posts at the CIIE. While she worked at the site of specific forums to provide directions for visitors in her first year, her job for the next two years was busier.

The second year, she was a volunteer at the lost-and-found information desk.

We had people handing us lost mobile phones, wallets, bags and passports, and some were claimed, she said. At the end of the day, we brought unclaimed objects to the police.

Last year, Shen was tasked with guiding buyer groups at the pavilion for food and agricultural products. Before a group arrived, Shen was informed of its interests and was ready to take them to the booths.

We were at our posts already when the exhibitors set up their booths and arranged their exhibits and were the volunteers that served longest, she said. We also had to remember a lot of information so we could better introduce the pavilion to the visitors.

This time, Shen said she got her dream post working in the largest conference hall at the site of the CIIE where some major conferences are held during the event.

This job also requires me to have knowledge of different pavilions and facilities at the site as well as some of the most interesting exhibits so I can direct the guests to where they want to go, she said.

Shen said she probably will not return next year because next November she will be busy looking for a job. She wants to work as a public servant.

During her time at the expo, she had the chance to talk to some Russian-speaking exhibitors and has the impression that her fellow residents are more and more aware of foreign brands over the past four years through the CIIE.

The foreign exhibitors have a great passion for the event and also the Chinese market, and Chinese people as consumers welcome new quality choices when making their shopping lists, Shen said. I'm proud that I have been a witness to these changes. 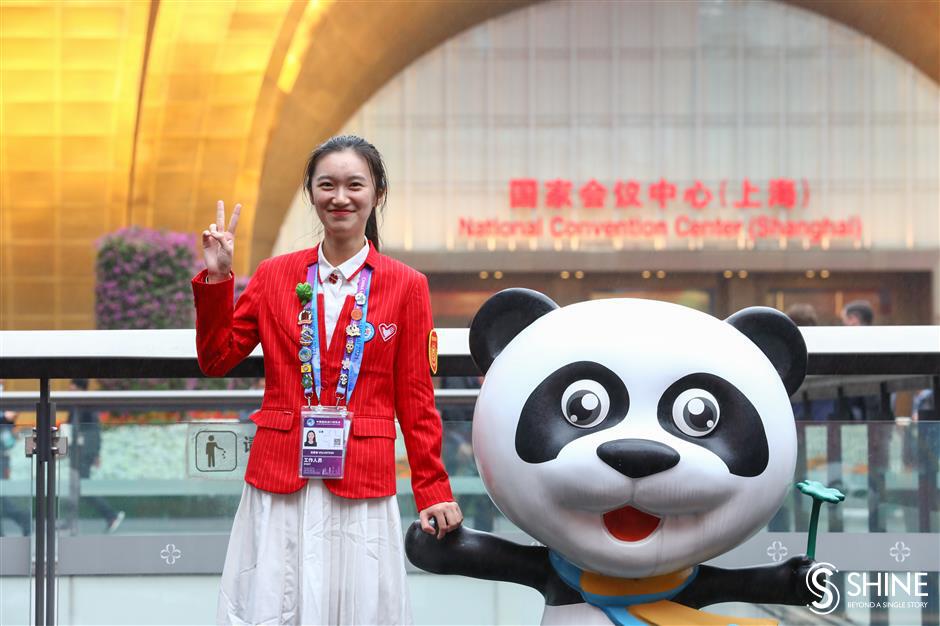 Shen Yin poses with Jinbao, the mascot of the CIIE. 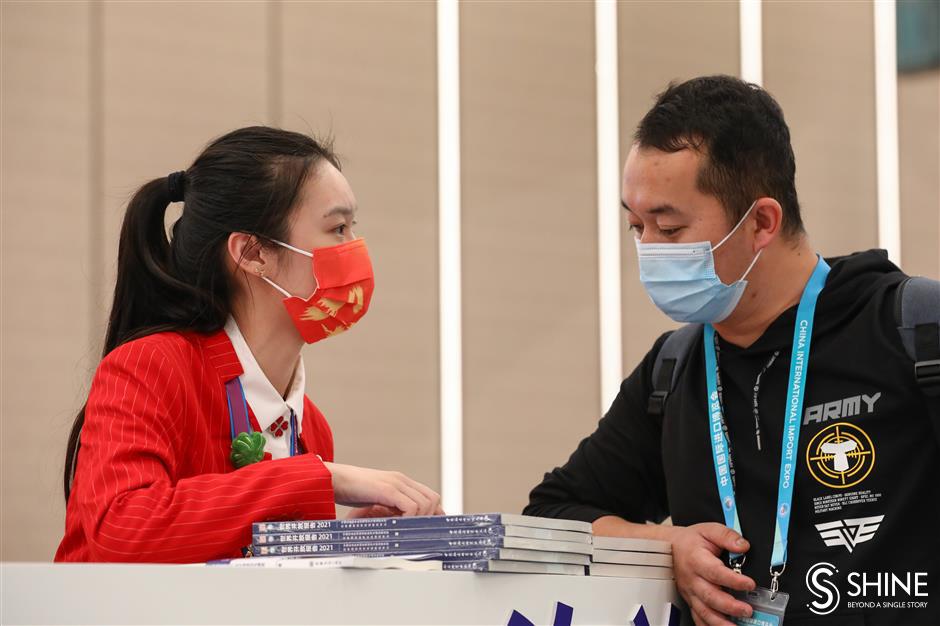 Many of the volunteers who serve at the CIIE have had plenty of volunteering experience previously, including Jiang Xinyi, 22, a student at Shanghai Zhongqiao Vocational and Technical University. She says that there have been few events like the CIIE, to which she has returned three times.

Jiang still remembers her first year serving at the event at the National Exhibition and Convention Center, the mammoth exhibition hall where the event is held.

I felt quite frustrated that I was not able to tell people where they should go sometimes, especially on the first few days, she said. I had my post, but I walked a lot accompanying people to their destinations while other volunteers were available to cover my position.

For the next three years, she worked twice as a volunteer to serve other volunteers. The importance of good service is fully recognized at this event and is what keeps volunteers returning, again and again, Jiang said.

She helps her fellow volunteers by training them before they go to their posts and standing by for them to address their needs during the event.

I impart to them my own experience from my service to help them do a better job, she said. For example, I remind them not to use their mobile phones too often when they're working.

Compared with most other events, the CIIE, Jiang said, is special in its national level of significance, which requires a higher standard of service in every regard, including volunteer service.

Working at the CIIE, we represent the entire community of Shanghai volunteers and we have to give our best, she said. 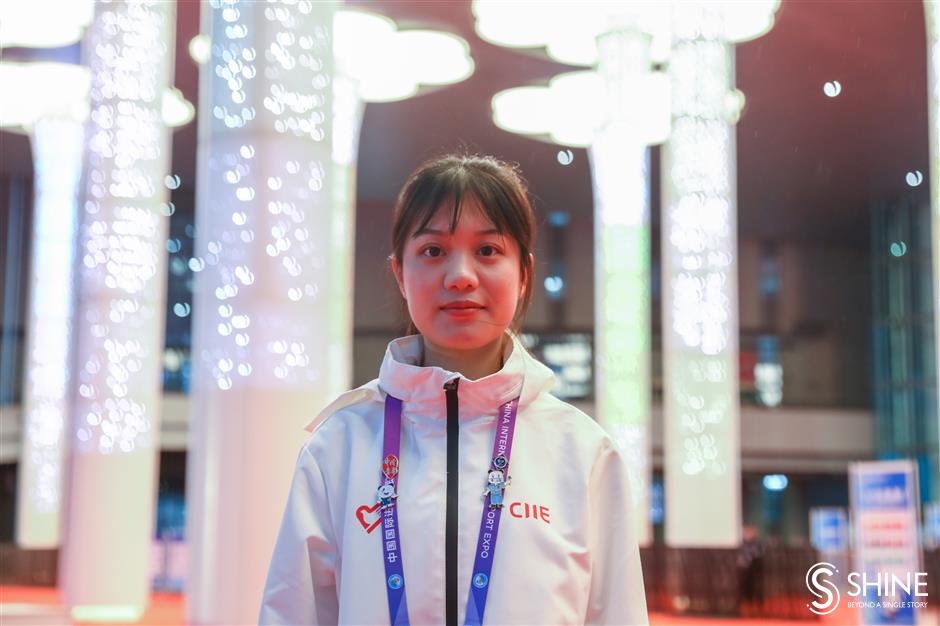 Jiang started out working toward a vocational college degree in tourism management, but now she is a student of food quality and safety control in her graduate year. She won't be able to return to the CIIE again as a volunteer next year.

Jiang is no stranger to the moment of saying goodbye at the end of a volunteer program when there are often a lot of emotions.

Once we had a program in which we regularly visited a group of autistic kids and planted flowers and baked cakes with them, she recalled. I felt so sad when kids asked me if we were coming for them again the next week, but we could only tell them that we'd be back the next semester.

Jiang especially cherishes her friendship with her fellow volunteers, some of whom have also served at the CIIE more than once. The whole volunteer service is fulfilling to her.

When you help others, those who are helped might be inspired to help other people, thus carrying the volunteering spirit forward, she said. I kept coming back to the CIIE with this mission in mind. 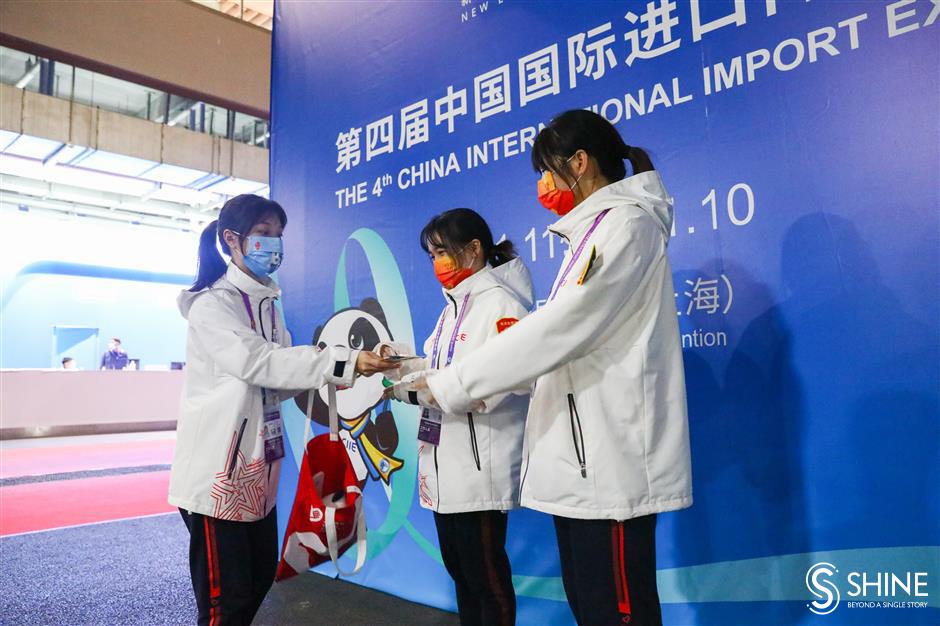 Wang Zhe, 22, a student at the Shanghai Vocational College of Agriculture and Forestry who is another four-year volunteer on the CIIE this year, served at the event four years ago not as a student, but as an armed police officer.

Wang, who joined the armed police in 2017, said he signed up to serve the first CIIE in 2018 with no second thought.

As a Shanghai local, I felt so proud that such a large international expo was to be held in my city and was inspired by the passion of my fellow citizens toward the event, he said.

Since enrolling at the college in 2019, Wang has been active in organizing student events and volunteer services.

The job of a volunteer, Wang said from his own experience, is not to be showcased, and in fact, sometimes volunteers can even be invisible, but that doesn't negate their importance.

During his first year at CIIE, Wang worked with catering service organizers early before the event opened to ensure that plenty of food would be ready for all visitors each day.

All food was transported into the exhibition hall overnight, and our job was to help the restaurants prepare the food for people, he said.

The second year, instead of directly helping visitors at the event, Wang and some of his fellow students assisted the police officers at the event by preparing goods for them, and the third year, he served as a volunteer to aid other volunteers.

Also at the National Exhibition and Convention Center, Wang volunteered at the Auto Shanghai 2021 show in April this year. His job was to prepare parking permits for people who attended the event.

I was the only volunteer who worked with four staffers on the job, and together we were responsible for making the parking permits for over 40,000 cars, he said. We often worked until late at night.

The volunteer service sometimes also means a lot of sacrifices. Sometimes students may not have enough time to prepare for exams or to look for jobs.

Just like most other four-year volunteers, Wang, who will graduate next year, is on his last CIIE mission this time, but he holds dear his volunteer experiences.

When you serve others, a 'thank-you' and a smile from others will immediately fill your heart with a special happiness, and you know that those you help feel the same, he said. This selfless love for others eventually makes our community better. 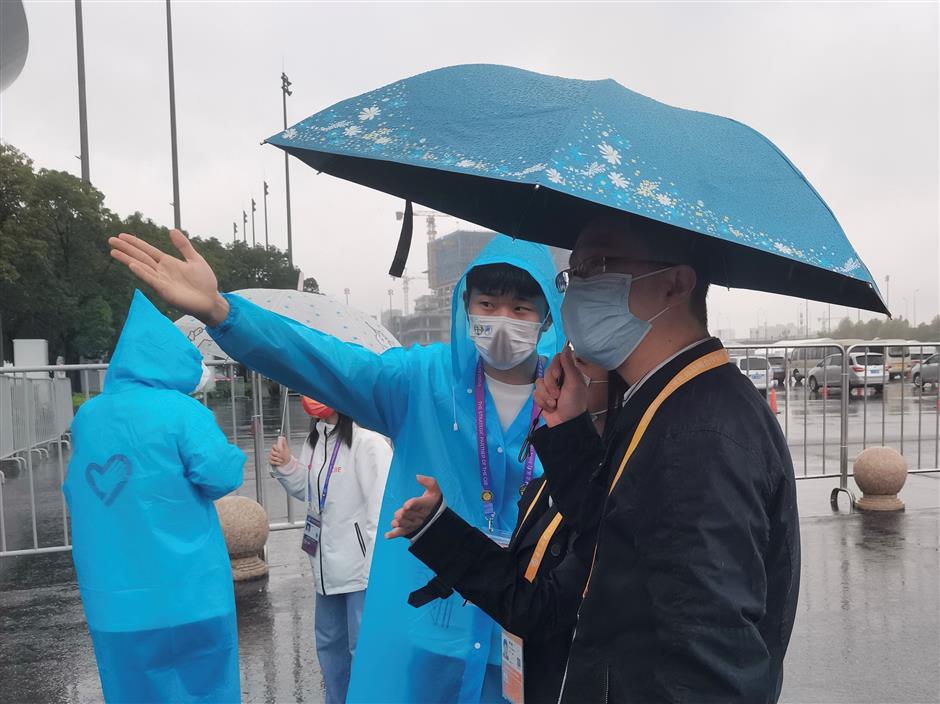 Wang Zhe, a four-year volunteer, points directions for visitors to the fourth CIIE during the event.