The 4th China International Import Expo (CIIE) concluded on November 10. The fair, held in autumn annually since 2018 in Shanghai, is the world's first import-themed national-level expo. Its purpose is to promote the Chinese domestic market to foreign companies, and boost domestic consumption.

Despite the success of this year's Expo, the pandemic made it more challenging than previous events. Visitors were required to provide proof of vaccination, undergo nucleic tests and provide a health code, showing that they had not recently been to any COVID hot spots.

Altogether 10 Minhang staff from the medical system were sent to join the force.

Mao Zhihua, from the Minhang Health Commission, has been on duty starting from October 14. I coordinate between our medical team at the Expo and our district's pandemic prevention and control department, he said.

At eight in the morning every day during the fair, Mao arrived at work and collected information from medical stations and emergency treatment spots. He also checked the availability of ambulances and obtained data for a daily report.

He had to constantly stay abreast of the latest pandemic news and make decisions based on it. Every day at 4:30pm, he convened a meeting at which he and his peers devised pandemic control strategies. 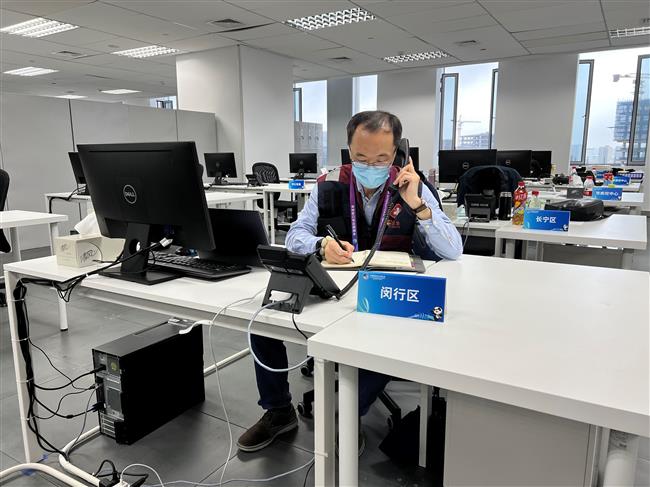 Mao Zhihua working as a coordinator

Yao Yijun from the district emergency center began his work even earlier. From August, he was in charge of medical worker entry permits. Patience and attention are needed facing such a load of sensitive information, he said.

Front-line workers at the medical and treatment stations were required to stay on site throughout the event. From October 27 until the end of the event, they stood daily at temporary accommodations without returning home, while more than 400 Minhang police officers patrolled core areas of the Exhibition and Convention Center.

On November 7, the temperature plummeted in Shanghai with rain and wind; but police stuck to their duty. Wu Ping, an officer, helped retrieve lost property and issued work permits to volunteers.

Yan Liqing and Yan An are father and son police officers. They don't belong to the same station, and only worked together once before on a pandemic control mission, but at the Expo, they happened to be assigned to posts just a few hundred meters apart, and were thus partners again.

Yan An had studied environment design, but two years after graduation, he decided to follow his father's path. Yan Liqing, a former soldier, has served the Expo for four years. He is proud of his son. I told him to be ready for hard work and be meticulous in everything he does. That's how to guarantee safety, he said. 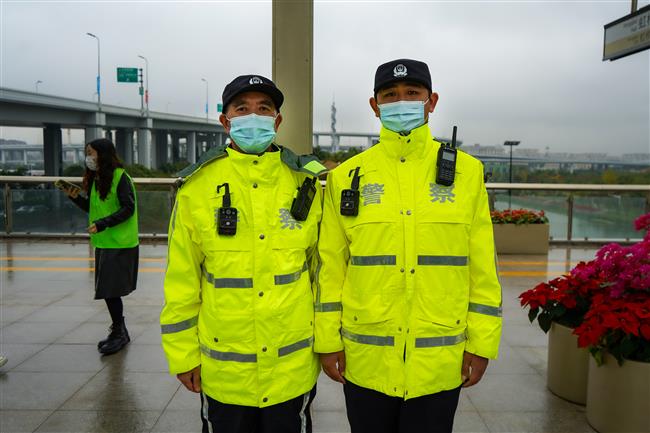 Yan Liqing (left) and Yan An

Shao Changxing stood at the last check entrance in front of the convention center, where visitors would have their temperature taken when they passed. He also answered visitor questions, using a translation app at times to communicate.

The Minhang fire department set up 16 mobile control stations around the convention center. Fire fighters could rush to any place in the Expo area within five minutes.

Wang Feng is one of many bus drivers who shuttled passengers from the convention center to local areas. His day began at 5:30 in the morning, disinfecting his bus before departure. I don't get to enter and see the actual exhibition, but I feel honored to serve the event, he said.

Xi Yuliang was in charge of one of the major parking lots. He has been on the duty for the past three expos. I know where each bus parks and where each ground line is even with my eyes closed; I've got a map in my mind, he said.

Volunteers, known as Little Leaves, were indispensable at the Expo, helping to maintain order by assuring that participants obeyed rules and answering guest questions. This year, a special voluntary team of experiencers was established, recruiting mainly college students to record and post their experiences with the event.

Su Ziqing, a college student from East China Normal University, made a video about volunteers trading CIIE badges as well as other cultural innovation products.

These badges were launched in the first expo for different voluntary team leaders. The collection grew in the following years and grew popular among volunteers. They would swap to get the badges they wanted most.

Liu Yongting, another experiencer from ECNU, was glad to see the likes she received after she posted the videos on social media. She also made a video in which volunteers from different parts of China cheering for the event in their dialects.

I want to share volunteers' experience and enable viewers to feel the Expo's excitement and wonder, Liu said.